Download Malware Unlocker Pro 1.1.5 – Android app to unlock the device due to malware!


As you know, malware on the Internet is divided into different categories, each of which causes different damage to smart devices. Various developers have released various security tools and software to combat viruses and malware, but unfortunately they are growing daily and using more powerful programming. One of the types or even the worst of these malware are smart device locks! So that if you hack into your Android device, the screen will be locked and you will not be able to access your device information even by entering a password. but do not worry ; Because we intend to be the first Iranian and Persian language website to offer a practical solution to solve such a problem to you dear ones. Malware Unlocker Pro UnlockedIt is a smart tool or a kind of security program to unlock the device due to malware for Android , which was developed by Ouadban Youssef and published in the big market of Google Play. By installing this software, you will be able to easily enter and control its management in case of any problem due to malware, just by sending an SMS to your smartphone. Two types of screen unlock modes are included in this smart application, in the first case the screen lock is broken and in the second case the screen lock is prevented by using other applications! Activation of each is in your hands and you can activate both modes.

App Malware Unlocker Pro has managed to be the first program, published in this field by paying interstitial $ 1.49 Self- rated 4.5 by 5.0 by users, Google Play downloads, which can now use the newest version purchased by it Get the unlocked form from Usroid site. 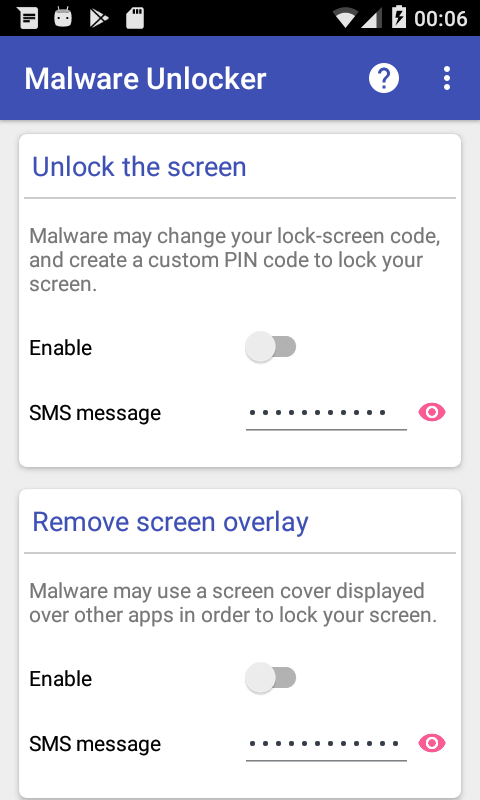