Modality Keyboard v2.0 – Keyboard with only 4 keys to type! Purchased version of the app for $ 0.99

One of the great features that was added to the touchscreen was the virtual keyboards. Before that, there were physical keyboards on smartphones that were 12-piece on most phones, and it was very difficult to type with them, but as the screens were touched, the keyboards could be used virtually in full letters. They found it much easier to type on smartphones. So far, various keyboards have been made for smartphones, many of which we have provided for you in Usroid. Almost all Android keyboards are similar in performance and structure, and only in some details such as appearance, execution speed, and so on. They are different. But today we are at your service with a completely different keyboard, a keyboard that completely changes the way you type on the phone. Keyboard modalityThe title of a different keyboard with unique capabilities for use on phones and smartwatches is for the Android operating system, which was developed by Animated Keyboards by Joyful Machines and has been released for $ 0.99 on Google Play. As you know, the screen of smartwatches is very small and not suitable for typing at all, but using this keyboard on smartwatches can be easily and quickly typed. On this keyboardInstead of putting all the letters together and occupying the whole page, the letters are divided into four categories and are displayed in four squares in different colors. In a bunch of letters that are all used to write straight lines like F. In the next category, the letters in which the curve is used, such as O, in the next category, the letters in which the diagonal lines are used, such as W, and in the last category, the letters in which both the straight lines and The curves used are like P. To write each word, just touch the handle of the letters of that word in order to suggest the keyboard of the word you want. If necessary, it is possible to add a word to the program dictionary. Note that currently only English is supported by the app.

Some features and capabilities of Android Modality Keyboard :

The Modality Keyboard app is one of the strangest and most creative keyboards that, with the satisfaction of Android users, has been able to get a score of 3.6 out of 5.0 from Google Play users. Now you can download the purchased version of this program along with all the features and capabilities from Usroid completely free of charge. 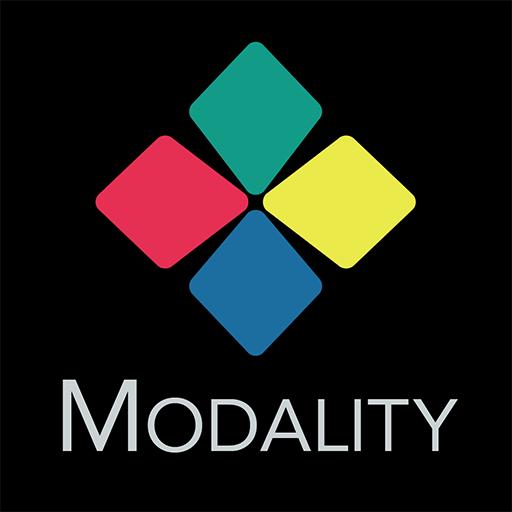 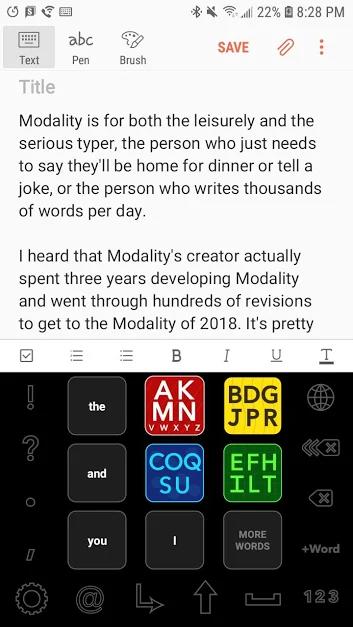