Download Shake Screen On Off PRO 3.1 – app to turn Android screen on and off by shaking!

Shake Screen On Off PRO v3.1 – Turn off and turn on the phone screen by shaking the
purchased version and complete the program dedicated to you dear ones

One of the most important reasons for smartphone failure is overuse of the phone’s power button. In addition to turning the device on and off, the power button on smartphones also has the task of locking and unlocking it. Mobile phone manufacturers have come up with different ways to protect your phone buttons and extend their life. Some manufacturers have provided the ability to turn the screen on and off by double-tapping the screen. Others use the phone’s proximity sensor to turn the screen on and off. If your smartphone or tablet does not have such features and you worry about it crashing every time you use the power button, the app we are introducing today could be the solution to your problem. Shake Screen On Off PROTitle is an application for turning on and off the screen of your smartphone and tablet by shaking, which was developed by FREEBOOKS Editora software group for Android devices and published on Google Play. The biggest problem with such applications is the very high consumption of RAM and battery in them. These applications are constantly running and always consume some of the phone’s memory and battery. Unlike other programs that do this, this program consumes very little battery power and takes up very little RAM and memory. According to the manufacturer, this app has the lowest battery consumption in Android 4.4, and in Android 5 and above, due to a bug in the Android operating system, it may have a slightly higher battery consumption. However, the developers of this program have announced that they will solve this problem in the next update.

Some features and capabilities of Shake Screen On Off PRO Android application :

Application Shake Screen On Off PRO program is essential for all Android devices. If your device does not have an alternative way to turn your screen on and off and you are worried about it breaking, be sure to install this program. Shake Screen On Off PRO has been released on Google Play for $ 1.99 and with a user satisfaction, it has been able to receive a score of 4.3 out of 5.0  from Google Play users. Now you can download the ad-free version, along with all the accesses and features of this program from Usroid for free. 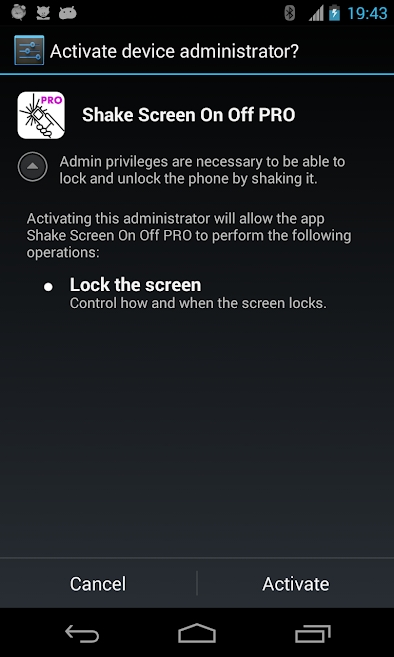 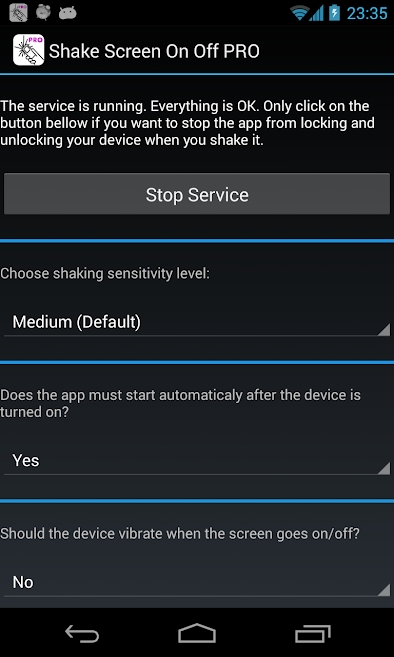 Shake Screen On Off PRO