Video Converter v0.2.2 – application for converting all types of video formats to each other with support for 4k and 8k quality for Android,
professional and complete version of the program presented to you dear ones

Ever since the video camera was invented simultaneously in two different parts of the world, the difference between videos began and continues to this day. The formats and formats that each camcorder company chose to record video could be very different. This difference made it very difficult to play videos, because each player also supported one or two video formats, and to watch each video from a different device, you must first convert it to the format supported by the player. We were converting. Things are much better today, and most video players, including smart devices, support most existing video formats, but even today for reasons such as reducing the size of video or making it suitable for broadcast on networks. Socially we need to convert video format.Video Converter is  an application for converting a variety of high quality video formats for the Android operating system, which was developed by the VidSoftLab software group and published for free on Google Play. With this application, most video formats can be edited and converted for different operating systems. It also supports video audio editing.

Some features and capabilities of Android Video Converter :

App Video Converter is a very useful program for those who constantly deal with video content for editing and conversion of different and need to always carry your laptop. This program can provide all the capabilities of a powerful computer software on smart mobile devices for the user. Video Converter is so popular that it has been downloaded more than 1,000,000 times on Google Play alone, and with the satisfaction of Android users, it has been able to receive a score of 4.1 out of 5.0 from Google Play users. Now you can download the Pro version, unlocked and without ads from Usroid for free. 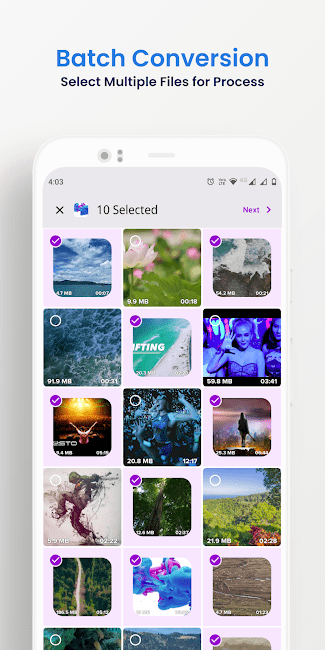