Cannon Ballers – Rugby is a simple but fun game in the category of action games in the style of Rougelite and Fast-paced, which has been released for free by the American studio Looty Games LLC for Android devices. Usroid is the first Iranian websiteThe game is published on the web and as soon as it is released on Google Play, it is released along with a modded version for download. The game with the full name Cannon Ballers – Roguelite has been released on Google Play and from this title, it can be understood that the whole game revolves around the Rogelite style. Cannon Ballers – Roguelite can not be described as a game with a new style or unique gameplay because the main nature of the game is modeled on older titles. However, considering that this game is actually an imitation game, but it must be said that the elements used in the gameplay part of the game are very attractive. In this game, you can experience a lot of excitement at the same time as simplicity. An experience that, to be fair, does not exist in many similar games. So that’s why we can say that Gunners is a very fun and well-made game; Even though it does not have a special story or stunning graphics.

The creators of Cannon Ballers – RogueliteThey used the term Hardcore Roguelike to describe it. According to this description, it can be seen that you are facing an exciting, hard and full of fighting experience in this game. This issue distinguishes this game from the simple and trivial mode and makes it an action and extremely exciting gameplay. So it is better not to pay attention to the appearance of the game and prepare yourself for a full-fledged battle. In Cannon Ballers – Roguelite you are in the role of heroes who have to fight against a large number of enemies with the help of their bomber machine on the battlefield. Your job is to move around, escape the enemy’s shots and finally destroy them by throwing cannons at them. Like many other Ruglit games, in the Gunners game you have the opportunity to earn special points and special forces from time to time through various stages.Tales Rush is modeled where you can choose from 3 options as a reward after a while of playing. Another advantage and feature of Cannon Ballers – Roguelite game is the chance steps, the shape, image and map of which will be different each time you run. This system is designed with the help of an intelligent mechanism that provides the player with a new and special design of that stage each time. Such a feature helps a lot not to repeat the game. Gunners games are now ready to download for free and tested in two regular and mod versions of Usroid fast servers. For complete familiarity with the gameplay and graphics of the game, you can watch the trailer video or screenshots of the game from the relevant section.

Note: In the game mode version, you spend gold to increase instead of decreasing. 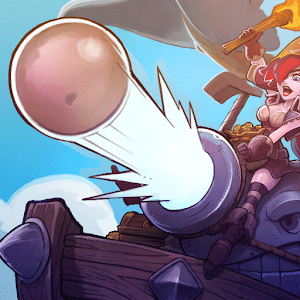