Unruly Heroes – Unruly Heroes is the name of a very beautiful and entertaining game from the French studio Magic Design Studios, which is produced and released in the style of Arcade. The game was first released for the PC platform through the Steam Store in January 2019, and two years later, the studio, in collaboration with Hong Kong company Perfect Game Speed, released a remake of the game for the Android operating system, releasing it in March 2021. Officially released on Google Play. The estimated price for this game is $ 1.99. Usroid proudly announces once again that for the first time among all Iranian sites prepared, reviewed and prepared the paid version of the game as purchased and has prepared it along with a separate modded version for free download. You friends can get this paid game in a tested and completely free way from Usroid and enjoy a premium and purchased title without the need to pay the slightest cost! Unruly Heroes game has been one of the most anticipated games for mobile platforms in recent years, but now the full and final version has been officially released and various users around the world have managed to install and experience it. This game is known for its exemplary and attractive features, unique and fascinating style, eye-catching graphics and very entertaining and of course challenging gameplay, and has become one of the best in the arcade category.

Unruly Heroes game with a lot of similarities to popular titles like Oddmar produced and designed. The main nature of the game is a two-dimensional action-platformer designed by imitating classic titles. This game generally includes different styles that along with action, platformer and arcade, this game can be considered a completely adventurous title and that is why this game and similar titles have many fans because everyone Any taste can enjoy the attractive and beautiful style of these games! The main story of Unruly Heroes is adapted from an ancient Chinese story called “Journey to the West”. According to this story, there was a Buddhist Bible in the ancient Chinese world that established balance and peace in the world. But one day a powerful demon finds the Bible and divides it into several pieces, hiding each piece somewhere in the land. With the disappearance of the power of the book, all its servants have become uncontrollable monsters that have now served the devil. You play the role of a master of ancient martial arts who, together with his students, decides to end this chaos that is destroying humanity. So they decide to embark on an adventurous and very dangerous journey to the western region of this great land and find all the lost pieces of the book and make a new Bible out of them, because the only thing that can stop this crisis. Will take the existence of the Bible. Now you have to set foot on this path and complete this important and difficult mission and save the world by destroying the enemies and monsters that are trying to stop you! Unruly Heroes game with attractive graphic features and fun and psychological gameplay that can keep you entertained for a long time. The game has dozens of different stages and missions in different places. You can manage and upgrade your characters with the coins you earn. So do not procrastinate and get this awesome and lovely game right now Get Usroid and enjoy a lot.

– Download the data file and decompress it. Copy the com.pwrd.unrulyheroesmobile folder to the Android / obb path of the device’s internal storage. 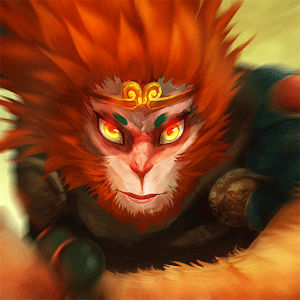