War and Order v2.0.50 – Strategic and exciting game” War and Order “for Android with data trailer
A well-crafted and competitive title with more than 10 million downloads on Google Play
Tested with online run

War and Order is a strategic and very attractive game for the Android operating system, which as soon as it was released, it attracted the attention of millions of players around the world and soon became one of the strategic style trends. This game is made by the American studio Camel Games, Inc., the creator of games such as Little Empire and Age of Z. Produced and shipped to Google Play for free. In War and Order, you play the role of a commander in a great battle between several kingdoms. Your task is to build an empire with different buildings and castles in order to expand the lands. But the enemy is lurking and waiting around your lands for an opportunity to attack your borders. You have to go to war with other competitors by building and using different combat forces like humans, orcs, elves, and so on. Your competitors are players from all over the world, and these struggles are real-time. Just like most strategy games, in war and order, your main priority is to expand your territory and the boundaries of your command. To do this, you have to build an army and with the help of your forces, go to the enemy bases and by destroying them, loot their resources and increase the level of your forces. But on the other hand, you have to be careful of enemy attacks.

In War and Order, you travel to a fantasy world. Where humans are present alongside imaginary and mythical creatures. In total, there are more than 50 different types of forces from various creatures in War and Order, each with its own capabilities and characteristics. You are able to use each one and make the most of the features of each one to your advantage. There are many other players on the big map of War and Order. These players are normally your enemies, but you can join and join their unions. In fact, you have to do this in part of the game because most of the enemy forces work in groups and you need a partner to deal with them. Your main goal should be to attack and loot other players’ castles. Castles are the main headquarters of the lords and commanders of the enemies, and if you can take them, you have made it easier for you to defeat the rivals. You can also find valuable resources and items by exploring unknown parts of the game map. Like most strategy games in War and Order, you can upgrade items and units. The game of war and order also has an integrated and interesting system for communicating with other players and chatting with them. In terms of graphic design, this game pays a lot of attention to detail and environmental designs are well observed in this game. If you are looking for an exciting and competitive title in the strategic style, do not miss the game War and Order and download the latest official update from Usroid servers right now.

Note: The game is completely online and cannot be hacked [there is no mode].

– Download the data file and decompress it. Copy the com.camelgames.superking folder to the Android/obb path of the device’s internal memory. 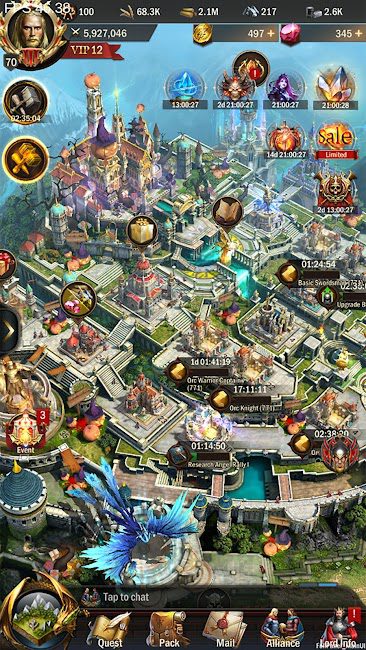