Gear Race 3D is a simple but interesting and exciting game with minimalist designs in the style of racing and recreation, which is offered for free but with in-app payments and is available to Android players around the world on Google Play. This game was created and published by the American studio Zynga. Usroid has once again introduced and published this game on the web for the first time among all Iranian sites. Zynga Studio is one of the main competitors of similar game companies such as VOODOO or SayGames, and just like these developers, it works on making small, fantasy and minimalist games. The FarmVille game series is probably the most important and famous game series in this studio, but Zynga also has more diverse titles such as Draw Something ,Gold Rush 3D , The Wizard of Oz Magic Match , Empires and Allies and Harry Potter: Puzzles & Spells released for Android devices. In the following, follow the introduction and brief review of Gear Race 3D game with Usroid.

Gear Race 3D is a simple game but in turn challenging and attractive. Although the main priority in this game is to set better records, but the general nature of the game is designed to be challenging and attractive. The main style of the game is Drag competition, and in this regard, it can be said that this game is probably the simplest racing game in the Drag style. Starting the game, you have to change gears according to the correct schedule to increase the acceleration of the car exponentially. If you change gears earlier than necessary, the speed of the car will decrease and if you change gears later, the car engine will be under a lot of pressure and your car may fail! The selection of the best option, which is marked in green from the other colors, is displayed in the engine speed section, so that you can change gears as soon as the engine speed reaches the green area. In fact, the most important thing you do in Gear Race 3D is the right timing. After reaching the finish line, your second task is to hit the screen quickly to the maximum speed and acceleration required to jump from the final platform. By setting better records, you can earn money and with the money earned, you can buy and personalize cars. This beautiful game with its three-dimensional and fantasy designs along with its fun gameplay can be a good choice for your leisure time. Right now, you can download the latest version of this game in normal or mod mode from the Usroid download box section. 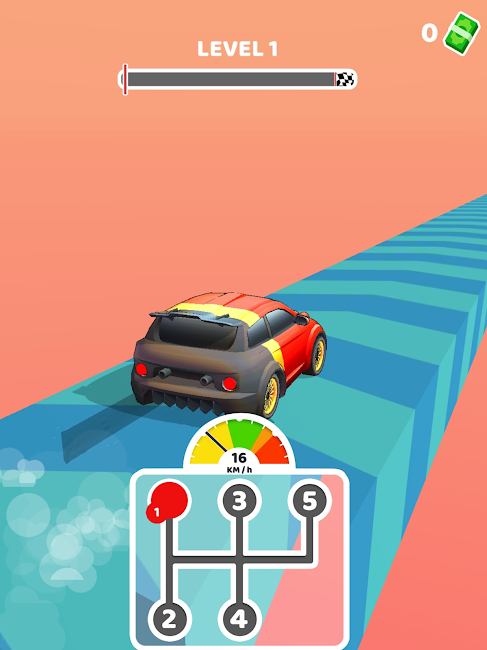